When stories about the terrible plight of Ukrainian people escaping conflict hit the headlines we knew we had to do something. With just one week’s notice Elystan Street’s co-owner Rebecca Mascarenhas had organised special fundraising dinners at the two Michelin starred restaurants, Kitchen W8 and Elystan Street that she co-owns with chef Phil Howard. Dinners were also arranged at Church Road in Barnes (also co-owned with Phil Howard) and Home and Flour & Water in Putney. Tomos Parry of Brat came on board and staff and suppliers all volunteered to help.
Rebecca also convinced her bank Coutts to match fund any money made on the night.

“Diners were incredibly kind” she says. “We suggested that everyone who came should give a donation of £110 and many people gave that and more. The Coutts match funding offer was extraordinary and together with gift aid the total amount raised is £147,00. We’ve been stunned by the total. We knew our customers were generous, but we’ve been awestruck by the support for the cause. The money has all gone to the DEC Ukraine appeal and we know it’s already making a huge difference to the people who need it most.”

Rebecca would also like to thank David Gleave of Liberty Wines who donated 12 cases of wine to the different events and Robert Rolls who donated Champagne sold at the events. Also helping with the fundraising was Barnes-based Ukrainian Dima Deinega who donated vodka from his own label Dima’s Vodka. Each restaurant made and sold cocktails using the vodka to help increase the total amount raised. 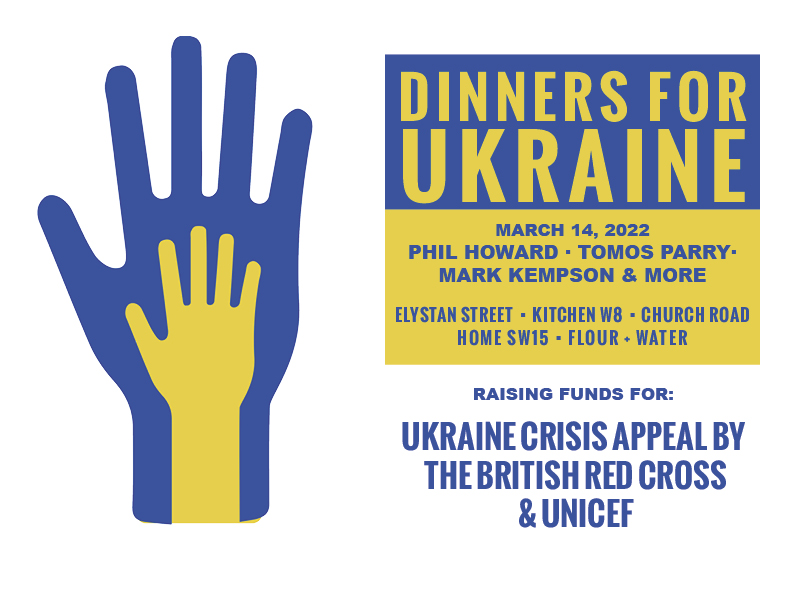